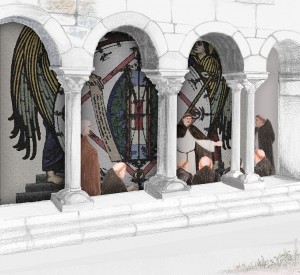 In the medieval sources, works of art are rarely referred to, let alone described in any detail.  When they are mentioned, it is seldom with more than a word or a phrase, at the most a sentence.  Almost completely ignored by art historians because of the immense difficulty of its text, Hugh of Saint Victor’s Mystic Ark is a forty-two page description of the most complex individual work of figural art of the entire Middle Ages, a painting also known as The Mystic Ark, making both the text and the painting among the most unusual sources we have for an understanding of medieval visual culture and its polemical context.

The purpose of the painting was to serve as the basis of a series of brilliant lectures undertaken by Hugh–who was considered to be the leading theologian of Europe during his life–from around 1125 to 1130 at Saint Victor, a Parisian abbey of Augustinian canons, whose school acted as a predecessor of the University of Paris. The purpose of the text was to enable others outside of Saint Victor–teachers, students, scholars, monks, canons–to undertake similar weeks-long discussions themselves by providing the information necessary to produce the image, an image that was meant to be repeated again and again, each new construction in a sense being an “original” (Fig. x1, 39, 3, 4).  Given the unusually large number of surviving manuscript copies of The Mystic Ark–enough to make it the medieval equivalent of a best-seller–it seems that The Mystic Ark was very successful at addressing a widely and urgently felt need among a great part of the educated elite of Western Europe during a period of significant intellectual change.

The time was the renaissance of the twelfth century, a period of great theological inquiry in which, among other things, the very authority of divine revelation was challenged on the most fundamental level. One of the great struggles of the renaissance of the twelfth century was that between the “old theology,” an experiential theology of blind faith that is best represented by Bernard of Clairvaux and traditional monasticism, and the “new theology,” a theology of inquiry whose faith was based on logic that is best represented by Abelard and the neoplatonic circles. Among other things, these two parties argued over the questions of to what degree worldly knowledge (the liberal arts) was permissible in the search for spiritual knowledge, and whether the greatest proponents of worldly knowledge (the pagan philosophers) should be studied. One of the most pressing issues in this regard was the theory of initial creation and the continued provision for created things: is creation best explained according to a literal interpretation of Genesis or is the account in Genesis more or less an allegory for the principles described by Plato in his Timaeus, the leading authority on creation, aside from Genesis, at this time?

Put as briefly as possible, the “new theology” was perceived as shifting the focus of advanced thought on one of the major subjects in the education of society’s intellectual elite from salvation to science, thus leading to a human-centered philosophy of creation–a world view–rather than a God-centered one. It was seen as undercutting the significance of the history of salvation as one of the most fundamental components of orthodox Christian thought, and downplaying the role of the Church in this construct. The “old theology” was violently opposed to this school of thought, which was based on the enormously prestigious neoplatonic precedent. However, at this particular moment, circumstances were such that neither the “old” nor the “new” theology could establish its position on creation as overwhelmingly persuasive enough to capture the main body of the educated public. In this period of both pronounced traditional spirituality and fundamental intellectual change, the most compelling argument concerning creation would be one that employed the most appealing concepts from both sides. Such a position, itself the result of a dialectical synthesis of the two extremes, would potentially have not only the ability to preserve the orthodox and experiential aspects of the “old theology” but also the power to appropriate the intellectual basis and prestige of the “new.” Such a position was a middle-ground position, the position of Hugh and of The Mystic Ark.

The text of The Mystic Ark describes a painting so astonishingly complex that it would be literally impossible to give a description of even the principal figures and their interrelations here, let alone discuss the significance of the work (Fig. x5-6).  But very briefly put, the painting of The Mystic Ark portrays all time, all space, all matter, all human history, and all spiritual striving. It does this through an image of the Lord embracing the entire cosmos formed by the traditional cosmic zones of earth (shown as a mappa mundi or world map), air (an elemental harmony), and ether (the cycles of the zodiac and the twelve months). In other words, it does this through an image of the Lord embracing the most complex neo-platonic macro/microcosm to date.  But it is a neo-platonic macro/microcosm with a twist. In this highly visible element of the “new theology’s” intellectual arsenal, the six days of creation are depicted as if coming from the mouth of the Majesty, while an image of the Ark of Noah overlies the world map (that is, the elemental component of earth portrayed as the stage for the history of salvation).  To the east, time begins, humankind is created, falls, and is propagated through one man, the First Adam. To the south, the Hebrews flee the spiritual desert of Egypt and wander to Jerusalem, in the center. To the north, the Jews are dragged off to exile in Babylon.  To the west, time ends when all humankind is judged. Down the center are inscribed the six ages of the history of humankind. At the center, one man, Christ, the Second Adam, in the form of the Lamb of God is the salvation of humankind and completes the typological relationship that began with fall of the First Adam indicated by the cubit-sized ADAM anagram. Ladders lead up each of the four corners, upon which sixty men and sixty women ascend this three-stage Ark, striving toward the image of the Lamb in the central cubit: the center of history, the center of the cosmos.

Most, though not all, of the previous scholarship on the image of The Mystic Ark has been largely descriptive, often little more than a paraphrasing of one or another of the Ark texts. The vast majority of the content of the Ark has been ignored, with the tendency being either to present the image in generalities or to focus on one or two out of scores of different themes and sub-themes. The four Arks–the essential characteristic of the Ark lectures–have never been central to any sustained analysis. The literary sources for The Mystic Ark have not been seriously investigated. The image–that is, The Mystic Ark, properly speaking–has never been satisfactorily studied as an image per se: how it works as an image, what its visual sources are (though a few iconographic forms have been noted), what logic went into the selection of its components, how they relate to each other, how they relate to the whole, and so on. There has been virtually no attempt to place the Ark in its historical context (as opposed to simply presenting the historical setting of the Ark). The polemical aspect has been almost entirely ignored. No one has actually ever attempted to suggest why, exactly, Hugh chose to answer the charge of the Ark lectures in the way that he did, why he chose the theme of the Ark of the Flood, why he placed this Ark in a cosmic schema, and how the various themes of this great undertaking of The Mystic Ark fit together. And there has never been an attempt at a more or less comprehensive interpretation of The Mystic Ark.

Fundamentally political, The Mystic Ark constitutes a major statement on the history of salvation phrased in a very specific way, one that addresses the contemporarily important issues of creation, systematic theology, neoplatonism, and the place of science in the education of society’s intellectual elite.  It is an attempt to leave the rejection of secular learning and logic by the “old theology” behind while at the same time appropriating the intellectual basis of the “new theology,” thus attempting to prevent the “new theology” from claiming this prestigious intellectual position exclusively as its own.  This study takes up for the first time in detail the most complex individual work of figural art of the entire Middle Ages, and establishes its connection with the origin of two of the most significant, public figural art forms of the Middle Ages, the Gothic portal and the exegetical stained-glass window.